Long-term forecasts and scenarios are vital for businesses that are making strategic business decisions over long term periods. It is also true that firms that are able to make predictions and forecast in relation to macroeconomic trends do make exceptional profit, an example being Apple – when it first launched the Iphone in January 2007. With many firms making strategic business decisions over long time frames, such long-term projections are essential to provide information to facilitate their business decisions as well as profitability.

Long-term forecasts and scenarios are also key to understanding some of the big economic issues that will shape global business in the coming decades. This research is based on The Economist Intelligence Unit long-range forecasts for 82 countries out to 2050. Not surprising to see the rise in China, India, Indonesia, Brazil and Mexico making the numbers as well. In 2050 the top three economies (China, US, India) will each be richer than the next five put together…

I was astonished to here HSBC announce they were practically ending its operation in Latin America’s largest economy (Brazil) – retaining only a few large corporate clients. The country’s interest rates are currently at an eye-watering 13.75% and expected to rise even higher this year Banks in Brazil are one of the few sectors that have been immune to the country’s slowdown. As Brazil heads for recession now, financial institutions are still posting record profits. In 2014, the country’s economy grew 0.1% – yet Brazil’s top five banks managed to increase their profits by 20%. HSBC, the sixth largest bank in Brazil still lost $247m (£160m) according to a BBC business report.

It still obvious China is expected to overtake the United States in 2026 in nominal GDP in US dollar terms and maintain its position as the largest economy to 2050. India is projected to move up the ladder to third place, with real growth averaging close to 5% up to 2050. Indonesia and Mexico are expected to spring into the top ten world economies from 16th and 15th place in 2014 to fourth and ninth place respectively by 2050 according to the EIU report. Representation of Western economies within the top-ten listing is not expected to be that significant. For instance, The USA, Germany, the United Kingdom and France will all move down the rankings, but only Italy will lose its place within the top ten.

The Economic Growth of Asia Endures 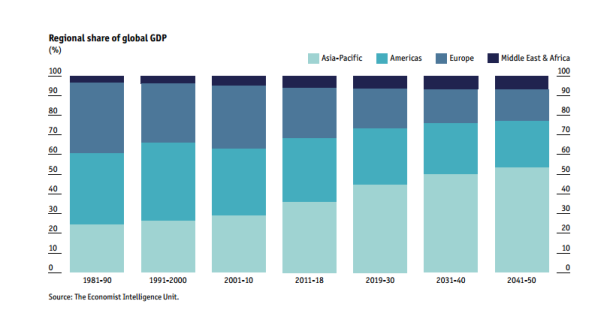 By 2050 it is expected Asia will account for 53% of global GDP not as the same pace as experienced during the millennium era. The upsurge of Asia is not a new phenomenon; the rise of Japan and South Korea has been witnessed over the second half of the 20th century. The start of the new millennium saw another boom, with many Asian economies recording high growth rates that took their share of global GDP from 26% to 32% between 2000 and 2014.

The top three economies of the world will be the US, China and India By 2030. China and India’s growth alone in particular by 2050 will be greater with each being richer than the next five countries (Indonesia, Germany, Japan, Brazil, and the UK) put together. Will China and India’s economic might, push them to take on a much bigger role in addressing global concerns such as climate change, international security and global economic governance? I do honestly doubt that…..

During the period between 2015-50, global working-age population will drop from 1.7% to 0.3% as predicted by the EIU report. It is expected majority of countries in Africa and the Middle Eastern region will benefit from an increase in their working populations, which will be an advantage in sustaining higher growth rates in the forecast period. Potentially, labour force of Angola, Nigeria and Kenya are expected to almost triple between 2014 and 2050, rising respectively from 9m to 28m, 56m to 161m and 18m to 48m. The labour forces of Algeria, Egypt and Iran are expected to increase considerably too, doubling in size by 2050. But the big question is – would there be enough jobs in these countries to reduce unemployment and sustain economic growth?

These economies will primarily benefit from favourable demographics in the forecast period, with higher birth rates supporting a healthy supply of workers. For countries with favourable demographics, the EIU forecasts assume that growth-friendly policies are pursued and are successful in providing jobs for a growing workforce and ensuring longer-term growth. Failure to achieve this will lead to a growing number of potential workers unable to find employment, resulting in a source of significant political instability and a missed opportunity in terms of seizing an advantage offered by favourable demographics as experienced like a country like Tunisia – where the Arab spring started in December 2011.

Most of Europe and East Asia, by contrast, is expected to see labour-force declines, representing a severe drag on growth. Japan will see the greatest decline of over one-quarter, from 66m to 47m; China and South Korea are also expected to experience a 17-18% contraction in their labour forces according to the EIU. For Europe – Greece, Portugal and Germany will see their available labour forces decline by over one-fifth, falling between 2014 and 2050 from 4.8m to 3.8m, 5.2m to 4.2m and 45m to 35m respectively. Other, emerging European economies (with a few exceptions, including Kazakhstan and Turkey) will experience persistent declines in their available labour forces, ranging between 20% and 30% as these economies will see the drop in their labour forces act as a drag on growth.

In conclusion, economic policies to increase participation rates will be pursued to soften the negative effects of unfavourable demographics in the coming years, but these will not be sufficient though. Immigration policies will move up high on government agendas as most advance economies will be required to compete to attract a limited global pool of labour going forward.